as the market changes rapidly and enters a new era, "seeking change" is the foundation of any industry.

in the internet era, traditional industries have been undergoing transformation, trying to make an article on "internet " in order to seek a longer term development. so, what kind of effect will be generated after the "internet " of traditional pig farming industry? faced with this problem, guangzhou shadow technology co., ltd. was the first to hand over the "answer paper" in china.

dr. he jingxiang, ceo of shadow technology co., ltd., introduced at the press conference that "china is leading the data torrent, the industrial internet is overwhelming, and intelligent agriculture can find its place in this tide". it is under such a background that "fpf future pig farm" emerges at the historic moment.

dr. he jingxiang presided over the press conference

fpf is the abbreviation of future pig farm, which is a new concept of pig raising that "people, pigs, objects and farms" are put on the internet for intelligent management through big data.

so how does "fpf" fit into the actual pigs?

relying on shadow technology company "pig face recognition" technology, "fpf future pig" app, smartcard and cloud computing, pig, pig information input corresponding information base, farmers can through a smartphone, monitor the dynamic of the pig pig population, according to the priorities of the tasks, take the best measures to improve the efficiency of pig production.

a series of intelligent engine devices (such as estrus detector, fattening regulator, fine feeding device, etc.) are the "drivers" of future pig farms. the estrus detector can automatically collect the sows' voice, behavior, body temperature and other parameters 24 hours to judge whether they are in heat or not.

for example, fine feeding device only needs to set the time in advance, so that it can automatically feed, mix and feed delivery. in addition, it can also provide ingredients according to the nutritional requirements of different pig groups to truly realize the "eat what you want to eat and when you want to eat", which will not cause the waste of feed and can achieve accurate nutrition.

fpf in the future pig farms can effectively alleviate the "pain points" of previous artificial pig breeding, such as the inaccuracy of artificial situation checking, the insufficiency of meeting the nutritional needs of different pig groups one by one, and the difficulty in comprehensive management of pig farms' staff...... through big data linkage of all aspects of pig breeding, "efficient pig breeding and happy life" can be realized.

as a deep partner of shadow technology, yangxiang shares is also committed to "using technology to change the pig industry" and has been exploring the road of "scientific and technological pig raising" since 2004.
at the press conference, mr. shi liang, president of yangxiang shares "how yangxiang explores internet pig raising" and reveals how to "reduce the cost of pig raising by one yuan".
under the general trend of the transformation from consumer internet to industrial internet, the pig industry will also have a "new definition". can the current situation of "pigs can't live without people" change to some extent relying on the internet and realize the maximization of pig benefits through science and technology minus tedious artificial links?

it is not difficult to find that the current chinese pig industry is still a certain distance from the level of the united states, the netherlands and other countries, the domestic level of pig lag, affected by many factors, but "high degree of artificial dependence" must be a factor can not be ignored, it can be seen that the domestic pig industry has a lot of room for exploration.

mr. shi liang said that fpf's future pig farms will come from both the industry and the energy industry, "from the need to explore efficient ways to raise pigs" and "give the industry a better ability to raise pigs", so as to promote the transformation of the pig industry to "intelligent" and achieve gains in all aspects of pig breeding.
fpf "industry" fu can also reflect on the "industry information sharing and resource sharing", the intelligent pig platform not only can link up people, pigs, things, at the same time also realized the "interpersonal interaction" and "industry information and resource sharing", farmers in farming link encounter any problems, can be fixed by fpf future pig app to interact with experts online, ask for help
in addition, "fpf future pig farm" can fully share resources with the industry to achieve collaborative development.
mr. shi liang especially emphasized that yangxiang has reached in-depth strategic cooperation with shadow technology. based on the comprehensive application of fpf in future pig farms, yangxiang has made in-depth exploration in management, talent and supply chain, and created and shared with the vast number of pig farmers and suppliers, so as to reduce the cost of raising pigs by one yuan and keep up with the international level of raising pigs.

shadow technology: from farm to table, anything is possible

guangzhou shadow technology co., ltd. (hereinafter referred to as "shadow technology"), founded in 2017, is an internet platform company serving the whole industry chain ecology in the vertical field of "farm-to-table". it is committed to building a pig industry community and providing pig farmers with efficient and easy solutions for pig raising.

the team of industrial scientists includes 2 academicians of the chinese academy of engineering, 1 chief scientist of the state, 7 professors from universities and 5 doctors.

as co-founders of shadow technology, they have more than 20 years' experience in silicon valley on average.

thanks to the cross-boundary cooperation and joint efforts of many industrial scientists and it engineers, "fpf future pig farm" series of intelligent engine products have been able to meet the public in a timely manner.

at the end of the conference, shadow technology signed strategic cooperation agreements with intel asia-pacific research and development co., ltd., wuhan university and central south university respectively, which shows that more and more forces are joining the shadow company's team "committed to changing the pork industry chain with science and technology".

"fpf future pig farm" is the result of shadow technology fulfilling the mission of "changing pork industry chain with science and technology", but at the same time, fpf is a new starting point. in the future, "shadow and pig farmers will find a way to reduce the cost of raising pigs". there is still a long way to go. 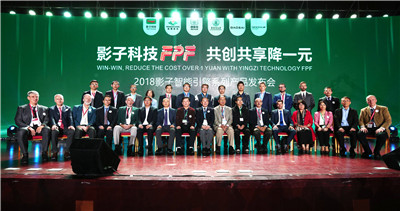