yang xiang appeared at the

the rise of industrial internet means that manufacturing, agriculture, transportation, education and many other traditional fields will be changed and reconstructed by the internet one after another. then, when the traditional livestock industry "+" internet, what kind of change will it bring?

yang xiang, who has been practicing the practice of "technology changes the pig industry", also participated in the exhibition for the first time this year. he gave his own answer to "digital farming" and discussed with colleagues from 58 countries around the world about the possibility of "digital farming" changing the industry.

"digital farm" is the theme of the german hannover international livestock show, in 2018, the animal husbandry animal breeding process is the biggest trend of higher degree of automation, "how to optimize work" as the breeding common pursuit of the goal, which is working with yang xiang has been committed to achieve "effective pig, happy life" is very fit.

as early as 2014, the company began to explore the internet digital intelligent pig breeding, to create "intelligent yang xiang".

foreign clients who come to consult

the company makes full use of "cloud, big, material, mobile, intelligent" and other new information technology, to provide information and data services for various producers in the industry ecological chain, with innovation and technology to create yangxiang internet intelligent service pig platform, in the field of female and piglet farmers to provide efficient, integrated solutions.


at present, with the rise of industrial internet, yangxiang has transformed from the traditional stage of pig raising to the stage of scientific and technological pig raising, and then transformed and upgraded again, stepping into the era of "intelligent pig raising".

foreign customers who are visiting the exhibition

4.97 yuan/jins in the first three quarters of 2018 (calculated according to the raw material price in the same period of 2017), constantly refresh the low cost of raising pigs, so what is the "secret" behind the cost reduction? the answer is scientific pig farming.

in 2014, yangxiang began to build "6 yuan cost, yangxiang pilot", "6 yuan cost" in the industry at that time was regarded as "the arabian nights", this goal is generally not optimistic, but through scientific pig raising methods, by 2015, yangxiang has many cooperative pig farms to achieve this goal.

after the realization of the 6-yuan target, yangxiang continued to propose the goal of "3,028 4-yuan 5 yuan", and grasped the five elements of pig breeding: gene selection, accurate nutrition, environmental control, production management and biological safety, fully explored the space for cost reduction in each link, and achieved "cost reduction and efficiency increase".

where does the "low-cost pig leader" come from? from yangxiang's own professional ability to raise pigs.

yang xiang since 2004 pigs, but it is not smooth all the way, ever also had a lot of "hard", therefore, yang xiang had spent eight years to study "how to keep good pig", through constant practice, fumble, summarized a set of scientific methods of raising pigs, and its ability to export to the more pigs and pig farmers, help them efficiently raising pigs.

yangxiang has taken the lead in building pig farms around the world to "make pigs live better," with a 13-story building that reuters calls "the world's tallest pig farm."

two or three layers of pig farms have been tried in europe, with some still in use and others abandoned, reuters reported. in recent years, due to management difficulties and public resistance to large-scale intensive pig farms, no similar pig farms have been built in europe. yangxiang's "building pig farming" model can greatly improve the understanding of traditional chinese pig farming in europe and the united states.

on october 19, 2018, the "fpf future pig farm" shadow intelligent engine series product conference was held, which truly realized the "putting pig farm on the internet", and yangxiang started the first "intelligent pig raising" train in china, instantly becoming a hot topic in the industry and attracting much attention.

yang xiang, who has always adhered to the concept of "scientific and technological pig raising", has also become a strategic partner of guangzhou shadow technology co., ltd. by chance, providing an application scenario for fpf's future pig farm intelligent engine.

"fpf future pig farm" is to use the technology and means of the internet, link people, pigs and animal farms, and support intelligent equipment to generate data calculation, intelligent collaboration, improve the efficiency of pig breeding, so as to reduce the cost of pig breeding. 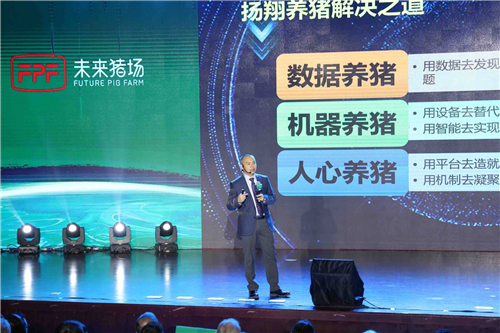 at the press conference, mr. shi liang, president of yangxiang stock co., ltd. has mentioned that it is quite difficult to explore the space of cost reduction through traditional pig raising methods, and we must "find another way" to improve the efficiency of all aspects of pig raising through internet technology, which is worth looking forward to.

at present, fpf future pig farm intelligent engine series products have been put into use in yangxiang internal pig farm, and preliminary results have been achieved.

the second half of the internet is the industrial internet era. at present, yangxiang has actively embraced the development and reform of the internet and entered the era of "intelligent pig raising".